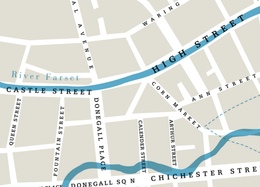 Went to the opening Matt’s ‘resounding rivers’ project last night. I recommend going along to some of the sites while it’s on!
Theres a BBC article about the project, and the full blurb is below:

At PLACE and sites across Belfast City Centre
Launching Thursday 6th May, 6-9pm
Runs until Saturday 5th June 2010
Belfast’s forgotten rivers, waterways and associated industries have been given a renewed presence within the city. Six sound installations have been assembled at six different sites across the city. Each installation can be heard out in the street, presented as an enhancement of the everyday sound space. Each site has been selected because it is situated upon, or by, the previous route of one of Belfast’s three central rivers. Two of these rivers, the Farset and Blackstaff, no longer flow over ground – they are constricted to large pipes running beneath the city. The third river, the Lagan, is still a prominent feature in Belfast but was once much wider. By deepening the Lagan’s channel, a great deal of land has been reclaimed and built upon.
The sound that is presented by each installation is a re-imagining of what the city’s buried and constricted rivers and waterways might once have sounded like. Each of the six sites would have had a different relationship with its respective water source, and this is reflected in the delivered sound. In order to achieve this re-imagining, locations in Northern Ireland with similar water features to those previously found in Belfast have been visited and recorded.
Pick up a map at PLACE!
Listen at the venues below, 9.30am – 5.30pm every day, and Thursdays until 9pm:
PLACE, 40 Fountain Street
Kelly’s Cellars, 30-32 Bank Street
Bittles Bar, 103 Victoria Street
Cloth Ear, 35 Waring Street
Waterfront Hall, 2 Lanyon Place
BBC Broadcasting House, 25 Ormeau Avenue
Project conception, audio production and installation by Matt Green.
Graphic design and video installation by Ryan O’Reilly.
Advice and guidance by Ruairí Ó Baoill.
Resounding Rivers was made possible by funding from Belfast City Council.